Detoxes and Juice cleanses are absolutely everywhere in the run up to Summer and as much as I’ve tried to ignore them they just don’t seem to be disappearing anytime soon. So when the people from Purifyne Cleanse contacted me with the opportunity to trial their “3 day Fitness Cleanse” it seemed the perfect opportunity to see what all the fuss is about. I was skeptical to say the least, but it was only 3 days and it would be over before I knew it.

They deliver your cleanse to you on the day you decide to start your cleanse and sure enough a huge box landed on my desk Thursday morning as agreed. I was shocked by the size of the parcel and as I began to read through the instructions my mind boggled slightly, as a “Cleanse Virgin” it was quite complicated to follow and it took me a bit of time to decipher which juice was which as some were missing labels but once I got everything in place I began. 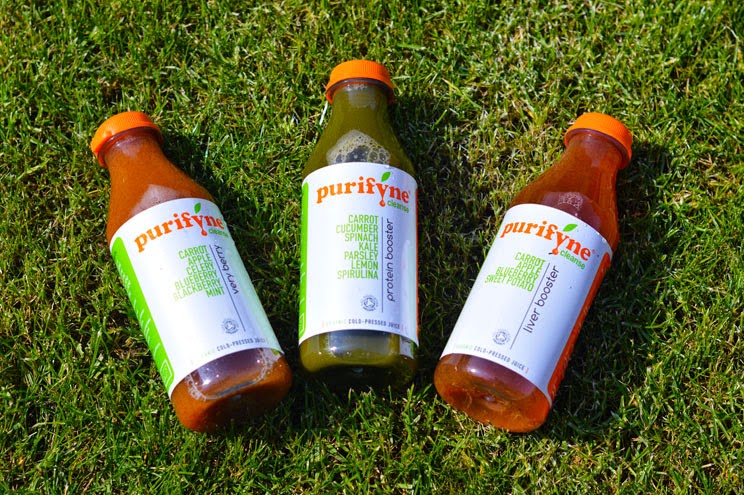 I started my day with a warm glass of water with lemon, as regular readers will know I’m lemon waters biggest fan so this really was a promising start. As I lay in my bed sipping my water I googled the next step of the morning cleanse “Dry face and body brushing” I opted to just do a gentle body brush as the skin on my face is very thin due to being on roaccutane but I really enjoyed the warming sensation the body brushing left on my skin.
Still in the morning phase of the cleanse I mixed my self up a teaspoon of ProGreens and water…this stuff pretty much summed up my initial perception of cleanses as it tasted like dirt. It probably would have tasted better mixed with the Purifyne juice they suggested but I just couldn’t work out which juice they meant so for the following two days I suffered the same. 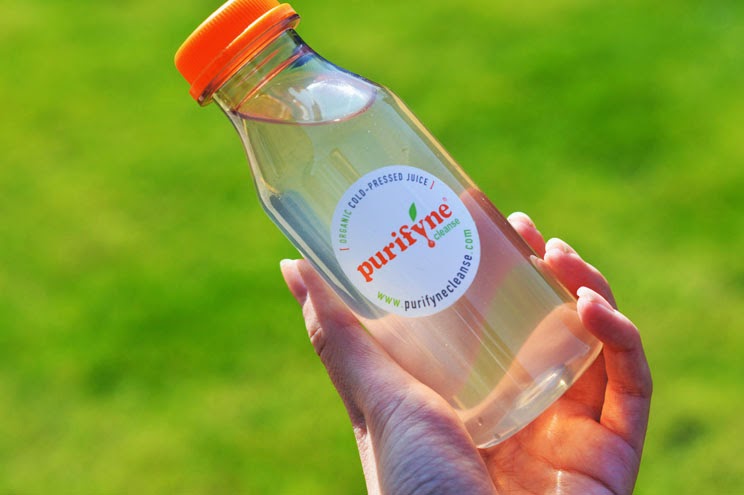 Come mid-morning it was time for some Coconut Water, as I lover of coconut ERRYTHANG this really made me think I could do this. To say this was the tastiest Coconut water has got to be the understatement of the century, it rocked my world! Reaching the end of a Coconut water bottle was always the lowest point of each day during the cleanse.

Lunch time! But not my usual, instead I downed what would normally be a snack for me (a protein smoothie). A blend of their own “Protein powder” with half a bottle of almond milk, FYI this almond milk is the Chanel of almond milk, I would do terrible things to have it readily available in my local shop.
But by this point I’m starting to see the effects of the sudden and drastic change to my usually regimented diet. My tummy is gurgling and I’m starting to wish I’d scheduled this when I wasn’t so busy as I envision I’ll be spending a considerable amount of time in the toilet over the next 3 days, if anything I have a new found respect for Cleanses and the people that do them.

Entering the afternoon phase I enjoyed an ice cold class of Very Berry Juice (which was delicious) followed soon after by my pre-workout “Maca Warrior”smoothie (not so delicious) and my one hundredth trip to the toilet – land mark.
I’m not feeling ravenous, I know I’m not full of solids but I am full of something which confuses my body into thinking it can keep going. But it is struggling to come to terms with the lack of caffeine, my usual pre-workout of choice.

I function normally as I hit the gym on the first day of my cleanse, but come day 2 and 3 my energy levels peter out and it’s a struggle which doesn’t go unnoticed by my Personal Trainer.
Post workout consists of another delicious bottle of Coconut water and a Sea Green Chlorella smoothie which I can only describe as “like drinking a spicy cucumber” which might not sound too appealing but was astonishingly refreshing.
As I drive home I sip away at the last juice of the day, the Protein Booster, Only to realise that I cannot drink another thing and end up having to skip my “dinner” of Potassium broth. The following two days I skip the last juice and opt for the broth instead.
With about 20 minutes to spare before bed I run myself a warm bath with the Epsom salts provided and relax before melting into my bed. 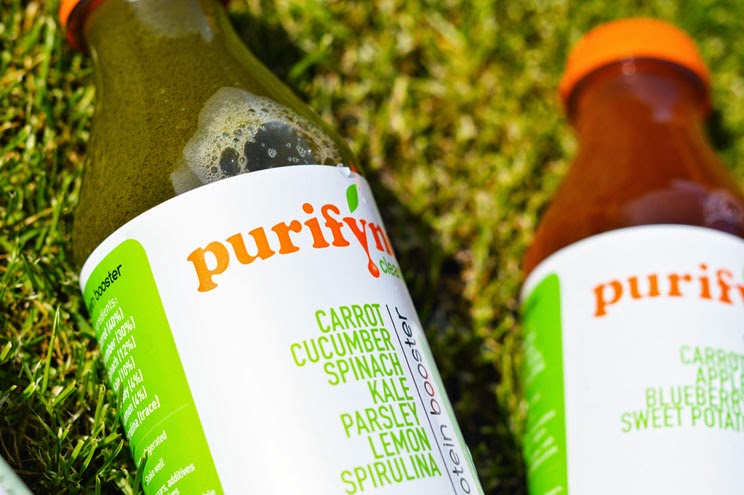 Throughout the 3 day cleanse (I’m still so impressed I managed to finish it) I religiously stuck to the program, y’know all adult and shit. There were high points (coconut water) and low points (contemplating moving my desk to the toilet) but after my energy levels dwindled and my body let go of whatever the hell it was holding onto (Oh good god the mental images) I awoke the first morning after finishing, feeling light and refreshed and once I refueled with some oats I really did see the full benefits (energy levels, skin glow and weight loss) of the last 3 days.

The Verdict? Well I’m not a complete “detox phobe” anymore that’s for sure. And at no point I would describe it as arduous, there really are benefits to be seen although during I would say there are little benefit to training during the cleanse. I saw those benefits Post-Cleanse where my energy levels felt renewed and I tackled workouts with a new found aggressiveness. I also think something like this would be great to coincide with a relaxing spa break where you are in a complete state of bliss and the nearest toilet is mere feet away as all that juice and all that flushing make running errands panic attack inducing.
The weight loss is something I ummed and ahhed about going into deeper but I decided it couldn’t be ignored. I lost quite a few pounds which for me is not a goal but I know that for so many people they need to see an initial weight-loss kick start in order to find their motivation and ignite their drive to get healthy, so I really do think this could be a great tool for motivating the unmotivated. But I do have to stress that this isn’t a cheap option so if you’re willing to invest £249 on the 3 day cleanse (or £339 for 5 days) I’d also suggest booking some PT sessions to further your weight-loss post cleanse, keeping the momentum and results going. 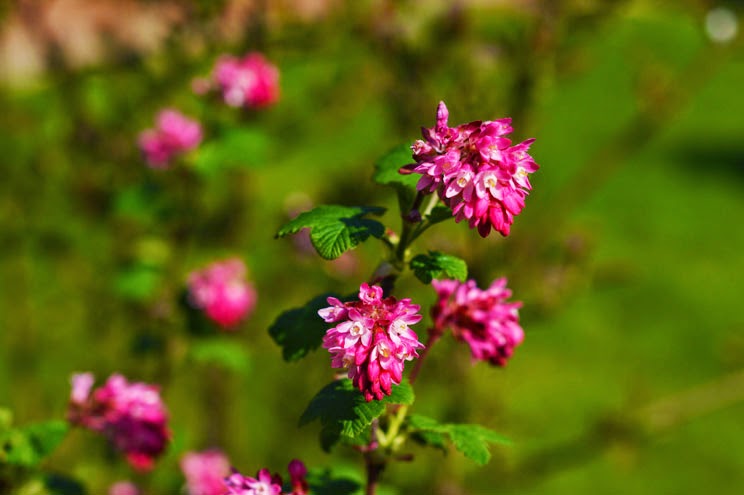 Have you tried the Purifyne Cleanse or any other cleanse for that matter? What were your thoughts and experiences?